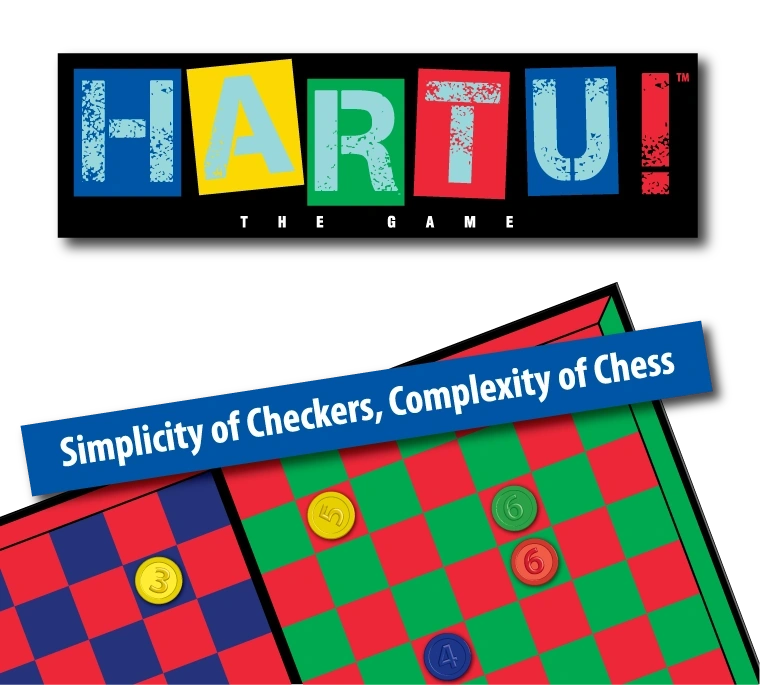 About this Great new Game

What will you do? The power is out the and the cellphone is dead. Oh no! No worries playing HARTU! The Game is a great way to pass the time until power is finally restored.

Real organic social networking! Imagine yourself sitting around a table sharing laughs and good conversation with family and friends while enjoying this great new game.

A Game for All Ages

A Game for All Ages

All ages from 8 to 88 will enjoy this new game. HARTU! is a challenging and exciting game of strategy, skill, and luck!

More about Hartu! the game

One sleepless night and HARTU! The Game was born.

The HARTU! story began with a visit to relatives in Spokane, Washington in September 2013, where I spent a sleepless night. With no experience in gaming or game design, the rules of this game and board design came to mind.  By morning when I shared my sleepless night with my family, the details became vividly clear.

Upon sharing with my oldest daughter about the game format, her energy and enthusiasm convinced me to make a prototype. The first game board was made with black and white squares and the chips were made of different colored aquarium beads with hand painted numbers. She came up with the idea of colored squares in the current pattern in which the family agreed was better. A new board was assembled using hand cut colored foam squares glued to the board that became our second board.

I spoke to a friend, who happens to be an illustrator/designer, about making my idea of a family board game a reality. He was excited about working on something new and challenging, and fun. We are very proud of the package design. It is result of a lot of hard work and  we are pleased to present it to you.

Our family spent the spring and summer of 2014 playing the game with friends and family. The wording of the rules were refined and edited numerous times but always keeping to the original concept of the game rules of that sleepless night in September 2013.

After researching different aspects of the manufacturing options, we were able to find skilled local suppliers in the printing, bindery, and injected molded plastic crafts to build the game into a reality. The process has seemed to crawl so slowly but at last we believe we have produced a unique and appealing strategy board game that your family and friends will enjoy.  -- KM

Do you have questions about our game. Send us a message, and we'll get back to you soon.